The three-dimensional structure of forests is an important indicator of biodiversity and carbon dynamics in vegetated ecosystems. In the northern boreal of Canada where most forests are unmanaged, our knowledge of forest structure and the factors that control structure is limited by the scarcity of inventory data. As impacts of climate change are expected to be significant at high latitudes, understanding the factors that control structure is not only critical for assessing the current state of boreal forests, but also for forecasting how boreal forests are changing. Increased frequency and intensity of fires as well as more favorable conditions for insect pests are projected for most of the Canadian boreal, likely altering the habitats and resources provided by forests and carbon storage in the terrestrial biosphere. Conversely, rising temperatures suggest increased productivity at high latitudes where precipitation is not limiting, potentially increasing wood production and altering habitat and resource availability. The goal of this research is to characterize how vegetation structure responds to a range of disturbances in Canadian boreal forests across gradients of productivity to better understand the combined effects of productivity and disturbance on structure. Light Detection and Ranging (LiDAR), an active form of remote sensing, provides an opportunity to characterize three-dimensional forest structure across larger spatial scales and at higher sampling frequencies than with conventional field methods. This research assesses spatial variations in the structure of boreal forests along 34 transects of small-footprint discrete return LiDAR data collected by the Canadian Forest Service (CFS) in the summer of 2010 (Fig. 1). While the CFS LiDAR dataset offers a detailed look at the structure of boreal forests, it is limited to a single snapshot in time. To incorporate the dynamic nature of forests, the timing, location and severity of disturbances are sampled along the transects with a time-series of Landsat data from 1972 to 2010 (Fig. 2). Finally, landscape productivity is assessed using 1-km estimates of Gross Primary Production (GPP) from the MODerate resolution Imaging Spectrometer (MODIS, Fig. 3). By incorporating disturbance history from Landsat and productivity from MODIS with the LiDAR structural ‘snapshot’, the response of vegetation structure to a variety of disturbance types and severities across gradients of productivity can be studied, leading to an improved understanding of the combined effects of disturbance and productivity on boreal forest structure. 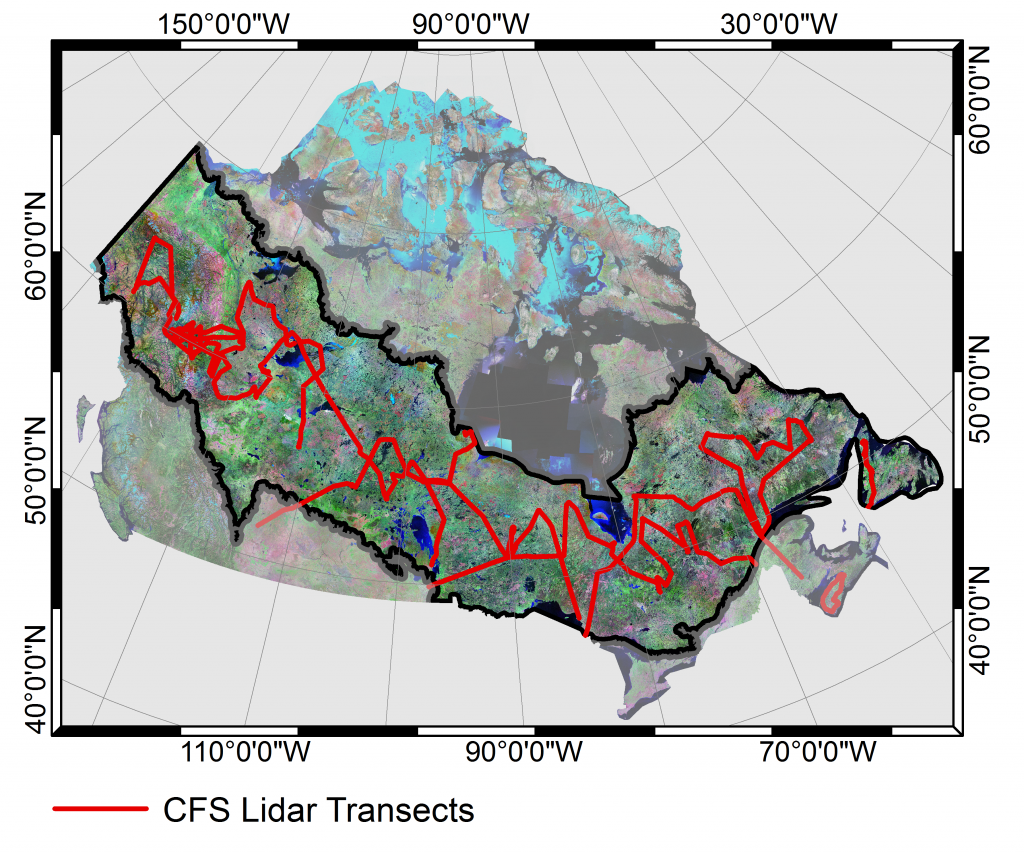 Figure 1: The flight path of 34 Lidar transects flown by the CFS in the summer of 2010 over the Canadian boreal

Figure 2: Time-series of Landsat images from 1972 to 2010. Spectral indices derived from Landsat data can be used todetect the timing and severity of disturbance. 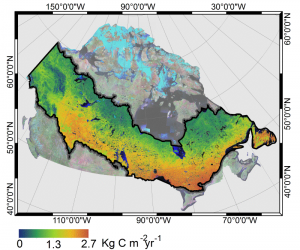 Estimates of Gross Primary Productivity, GPP, and light use efficiency, ε, derived from airborne and spaceborn remote sensing technologies have contributed to the scaling of local, tower based estimates to estimates that comprise the broader landscape. This is achieved by interpolating tower-based observations of photosynthesis related parameters, using spectral indices, such as the normalized difference vegetation index (NDVI) and photochemical reflectance index (PRI), that are calibrated within the footprints of the tower-based methods. Using airborne and spaceborn remote sensing instruments, these data represent top of canopy reflectances, and as a result, uncertainty exists around the magnitude of estimation errors that is introduced by vertical variations in canopy structure. LiDAR remote sensing combines laser with range finding techniques to accurately determine the travelling time between the emission of a laser pulse, reflection off terrain and/or vegetation elements, and detection back at the instrument, and offers a unique potential to characterize the vertical stratification of a forest canopy. Recent work investigates the use of high resolution ground based LiDAR and mid-resolution airborne LiDAR and tree modeling software to establish three-dimensional solid geometries of crown and branching structures that can be used to simulate the absorption of photochemically active radiation (PAR) as a function of canopy depth. Combined with an in situ sensor network that measures half hourly variations in leaf level PRI at various heights within the forest canopy, this study investigates relationships between the extinction of PAR with canopy depth and leaf level photosynthetic efficiency, and aims to broaden our knowledge on the effects of the lower canopy strata on stand level estimates of GPP.