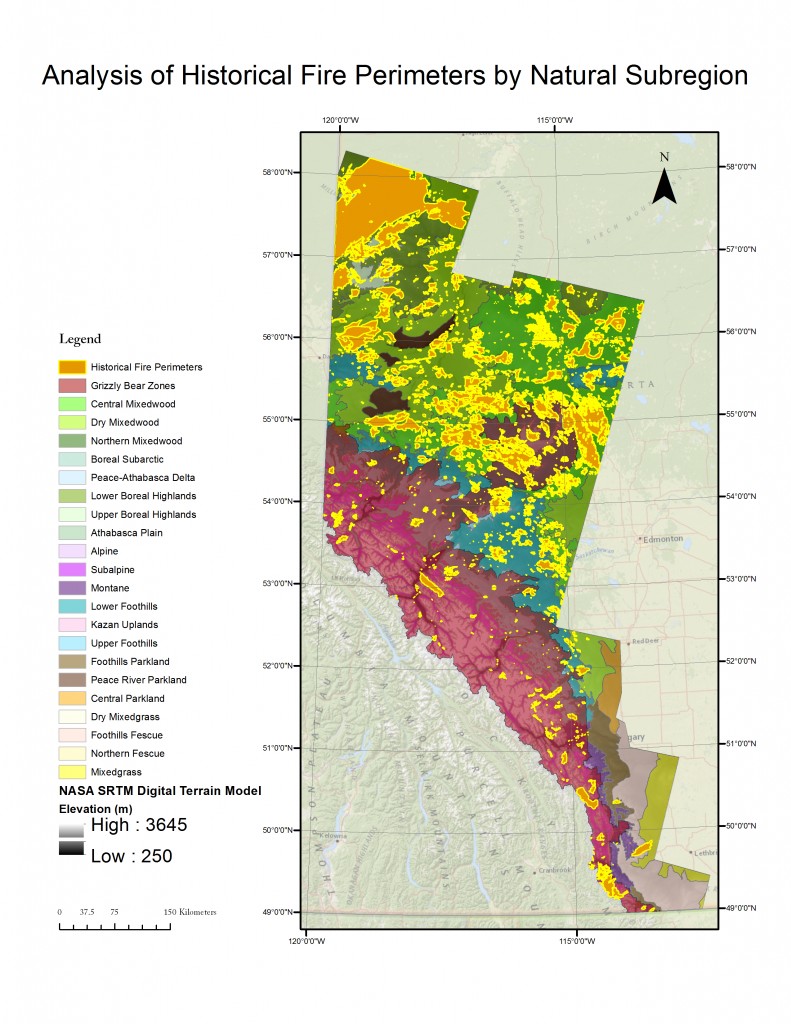 As the global footprint of humanity spreads, the earth’s capacity to maintain its existing ecological communities has come into question. Hidden among visible urban, agricultural, and industrial expansion is the historical extirpation of terrestrial predators. The loss of apex predators, such as the grizzly bear (Ursus arctos), carries profound implications for biodiversity across trophic levels, altering a host of processes from vegetation structure and the genetic fitness of prey populations to biogeochemistry. In southwest Alberta, an increasing human footprint is placing a complex network of pressure on the province’s threatened grizzly bear populations. The ability of managers to estimate future habitat states is critical to the survival of Alberta’s remaining grizzly bears. To better anticipate changes to grizzly bear food landscapes, we are simulating landscape-scale forest ecosystem dynamics critical to the formation and maintenance of grizzly bear habitat in southwest Alberta. Remote sensing provides uniquely spatiotemporally and dimensionally rich data with which to create and parameterise such forest ecosystem models. We utilise the Tree and Climate Assessment gap model (TACA-GEM) in conjunction with the Landscape Succession and Disturbance hybrid model (LANDIS-II) to run the simulations. In the initial phases of our work, we conducted an analysis of spatiotemporal wildfire patterns, derived species life history attributes for thirteen major tree species in the region, and conducted a rules-based classification of a new bioclimatic envelope model to map the distribution of each tree species. We created novel methods of parameterising soil and climate parameters Canada-wide, and an iterative transformation method of refining fire model outputs to improve fit with historical fire distributions. We compared the usage of climate average data from ClimateWNA (down-scaled PRISM climate data) to historical daily weather station data, as well as the implementation of two different fire models. In collaboration with research partners through the Foothills Research Institute, our ultimate aim is to better understand changes to grizzly bear carrying capacity across southwest Alberta. 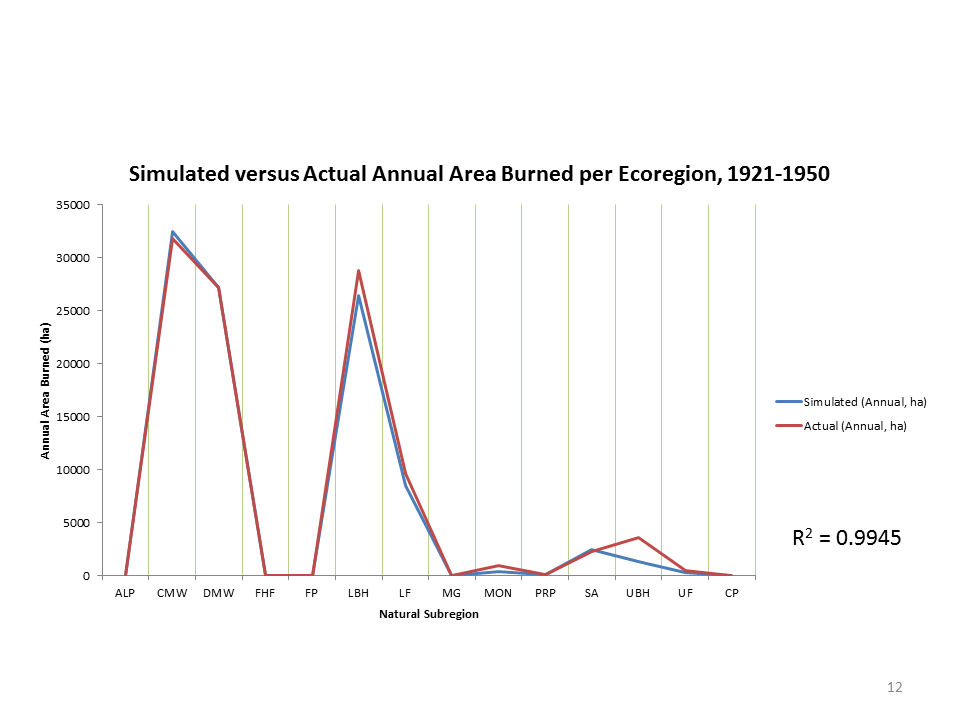 Tracking disturbances across the landscape is a fundamental objective of forest management and provides crucial information for the effective implementation of sustainable land use planning. Globally, forest disturbances may have cumulative effects on species diversity and distribution as well as geophysical and landscape processes. Disturbances also affect climate through structural and biochemical changes of forest vegetation; this can include change in land use and cover, surface albedo, evapotranspiration, and carbon flux. 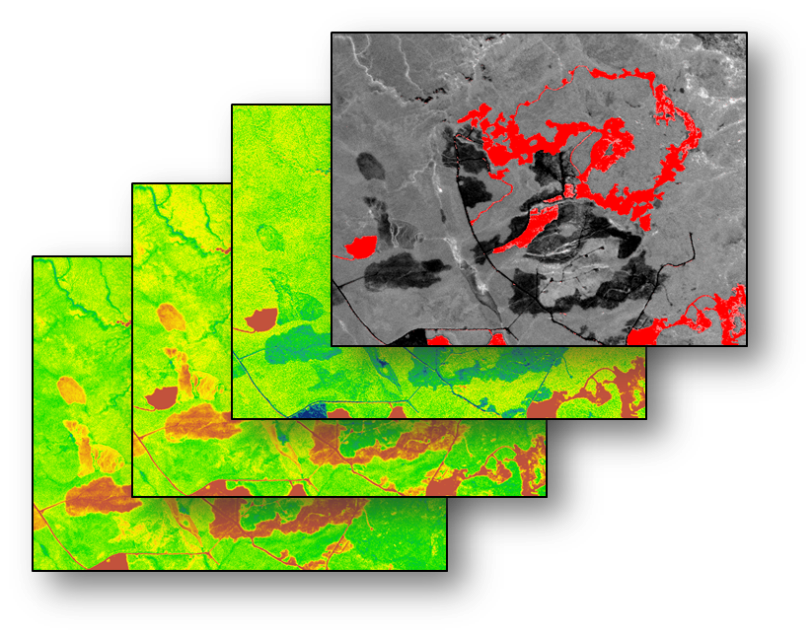 Mapping of disturbances in a timely and cost effective manner is only feasible through the application of remote sensing technologies. Until recently most remote sensing platforms were relatively limited in their ability to collect high spatial and temporal resolution data. Constellation platforms, which apply multiple satellites to collect data over several areas at once, have potentially solved the dilemmas associated with other sensors.

The RapidEye constellation, launched in 2009, is a commercially operational network of 5 identical satellites capable of delivering daily imagery at 5 meter resolution. We are using RapidEye imagery to develop quick and robust disturbances detection techniques to monitor abrupt disturbances across large areas. We have been working with a set of derived indexes that can be used to assess overall scene brightness, greenness, vegetation structure, and ultimately an overall scene ‘disturbance index’ (Figure 1).

Preliminary results of this research suggest that the RapidEye constellation is capable of resolving fine scale disturbances across the landscape with a high level of accuracy. We have also demonstrated that mapping disturbances using RapidEye could provide valuable ongoing disturbance layers to regional forest inventories and carbon monitoring projects.

The Boreal forest of Canada provides a variety of resources and services that are exploited by humans. Anthropogenic disturbances introduce a number of novel processes and patterns to forested landscapes that affect a wide number of biota. Beneath the Boreal forest lays numerous oil and gas hydrocarbon deposits that are extracted in addition to forest harvesting at the surface. The impacts from these interacting human disturbance activities on the Boreal forest are not well understood.

Aerial photography and satellite imagery are used to analyze the spatial patterns of anthropogenic disturbances. The advantage of using aerial photography to map disturbance mortality is that the higher spatial resolution (11-16 m2) captures the mortality details of individual disturbance events. Complementary to these data are moderate-resolution (30 m2) satellite images from Landsat TM and ETM+ that are used to track disturbances and successional phases through time. Combined, these data structures allow for the characterization of disturbance regime parameters such as frequency, severity, persistence, and seasonality, all of which affect successional trajectories and thus forest structure and composition.

The web-based decision support tool NEPTUNE (Novel Emulation Pattern Tool for Understanding Natural Events; Andison. 2012. Can. J. For. Res. 42: 1253-1263) is used to generate discrete disturbance events from disturbance features on the landscape such as harvest blocks, well sites, roads and seismic lines. The output includes a spatially-explicit disturbance event that may be analyzed for a suite a pattern metrics such as size, shape, number of patches, number of island remnants, proportion of residual forest cover, etc. In addition, the Vegetation Change Tracker (Huang et al. 2010. Remote Sens. Environ. 114: 183-198) is used to temporally segment the spectral properties of Landsat TM and ETM+ images to produce spatially-explicit maps of disturbances for a landscape through time. This information can be used to aid in planning anthropogenic disturbances that emulate some of the spatial and temporal characteristics of historic disturbance regimes like wildfire. 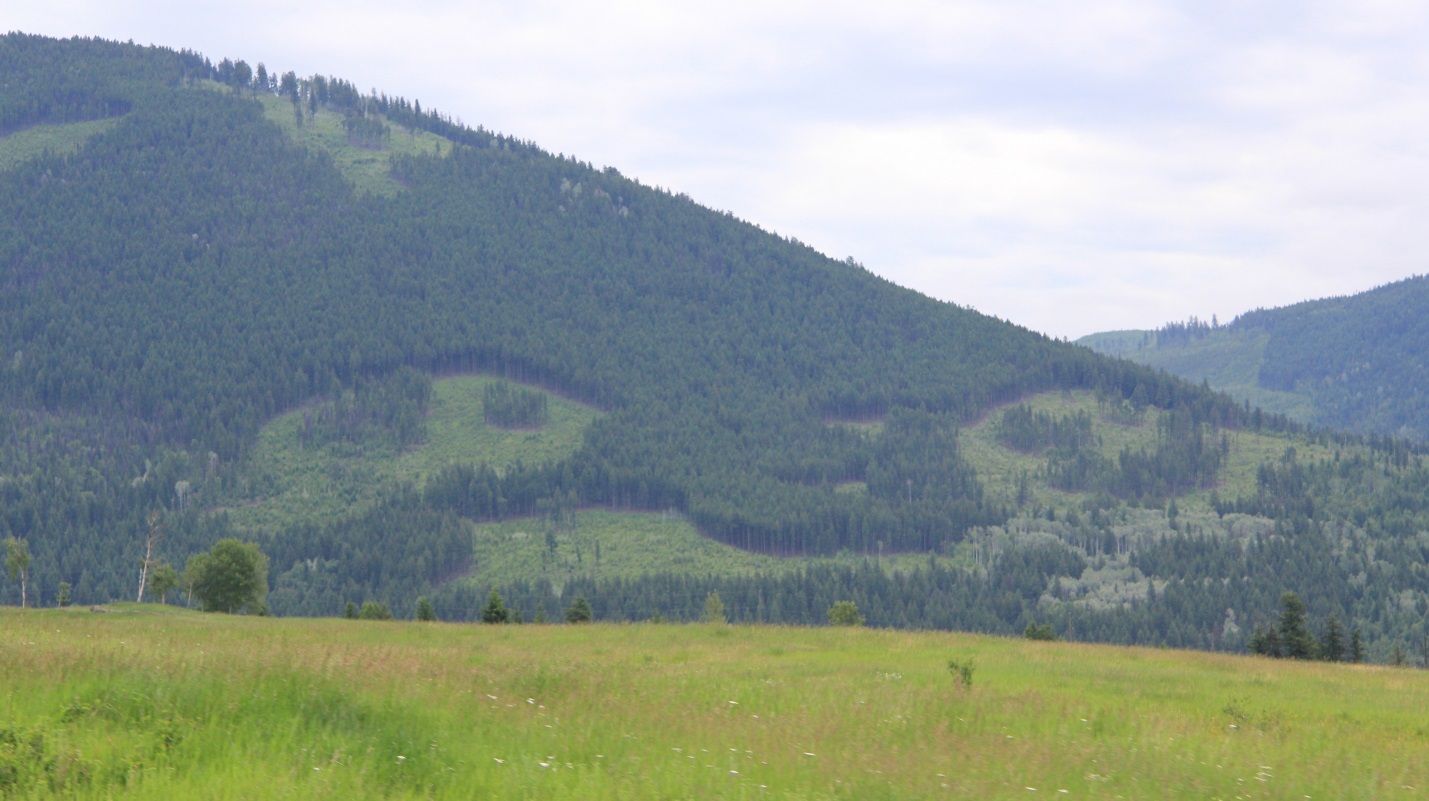 Forest harvesting that emulates the shape and size of a wildfire with retained island remnants. © 2013 Paul Pickell

Forest structure is inferred from interpretation of forest cover in aerial photographs. Using this information, it is possible to model potential habitat availability and connectivity using knowledge of minimum forest cover for a number of species such as the endangered woodland caribou (Rangifer tarandus caribou). Network analysis is used to determine how and where explicitly habitat connectivity has changed over time for the forested landscape. This new knowledge can aid the planning and monitoring of critical ecosystems and habitats throughout the Boreal forest biome and elsewhere.

The purpose of this research is to characterize the spatial and temporal patterns of anthropogenic disturbance activities in order to understand how human management of the Boreal forest is impacting biodiversity, forest structure, and habitat connectivity. The innovative methodology of this research combines several historical data sources to characterize anthropogenic disturbance regimes at multiple spatial and temporal scales, an advancement in forest management that is aptly needed. The expectation is that this research will elucidate the potential impacts from broad scale human management of the Boreal forest.